In this tutorial I’ll show you how to sew open parts together when crocheting amigurumis. This technique creates a strong and stable connection, but it´s not movable.

When can you sew open parts together?

Before you can sew both pieces together, they must be finished and filled. Then you can put the finished parts together as they should be sewn together. Both openings should be the same size and one side should have a long thread end. 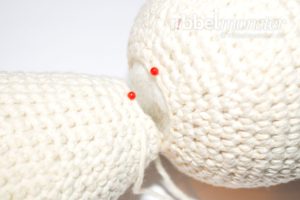 First find the right position of the parts and mark a point on both parts with pins, which should match exactly after sewing. If the head and body are sewn together, it is recommended to mark the middle on the front of them. 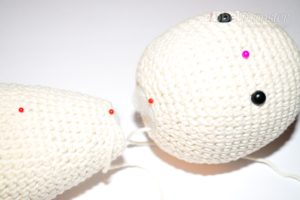 On the head you can orient yourself at the middle of the eyes for example. For the body you can mark a mid line oriented to the legs, lower middle or navel, if existing.

But there are also parts where it does not really matter how they are sewn together. Of course, in this case it is much easier and you can do without markers.

Then you thread the long thread end of one part into a wool needle and begin to sew the parts together around. You basically start at the end of the thread, wherever it originates in the round. 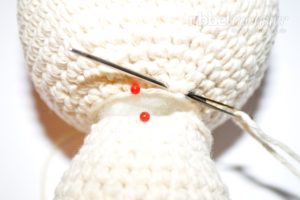 Here comes the end of the thread on the body right of the mark, which I therefore call the first part. You start now with a horizontal stitch from right to left through two stitches on the edge of the second part, here on the head.

The exit point on the first part and the entry point on the second part must be exactly above each other, so that both markings are exactly matching each other. With the stitch to the left you slip on one place. 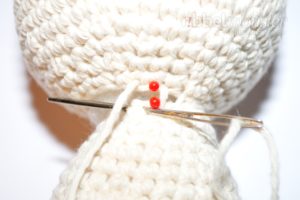 Now you cross horizontally from left to right through two stitches of the first part, here on the body. That’s the whole secret and you just continue this technique until the end of the round. Sometimes, by the way, it’s necessary to do a little filling just before you’re around to get a nice and powerful transition.

Once you’re around you’ll be working a second round the same way. After the second round, the thread end is secured and weaved in. You can do this by using the shorter end of the second part and then pulling the knot inward as I showed you when closing amigurumis. 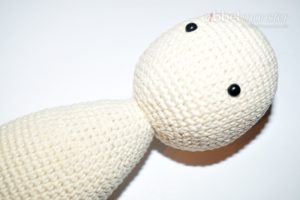 If you have done right, a stable and clean connection has been created. Here head and body were sewn together.

I hope sewing together amigurumis is now much easier and of course I’m looking forward to your next visit!