Today we like to crochet a polar bear and with that free pattern this is also very easy. For Kalle the polar bear we first crochet the head and body and then the arms, legs, ears, tail and a snout. Then everything is put together and the crocheted polar bear is ready to cuddle and love.

For the Amigurumi polar bear we first crochet the head and body in one piece. Then we still crochet arms, legs, ears, tail and snout. Finally all parts are sewn together and also some little details are embroidered. So fast your crocheted polar bear is already finished. 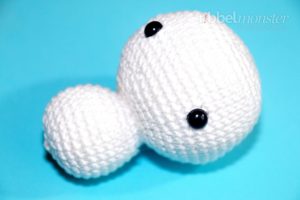 The head for the polar bear we crochet from top to bottom in spiral rounds exclusively with single crochet stitches. If you want to attach safety eyes, you will find an instruction at the correct place. Once you have finished crocheting the head, the thread is not cut off and we continue with the body.

Now we crochet the body next to the head. Thus your polar bear gets a stable neck, you should make sure to fill all parts as well. 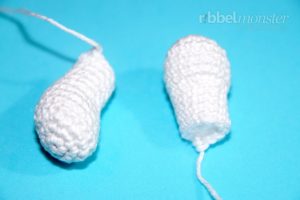 We crochet two polar bear legs now. Thereby we crochet from bottom to top in spiral rounds with only single crochet stitches. The decreases in the 8th round should not be offset, so that the correct shape results. At the end you let a long thread to sew them to the body. 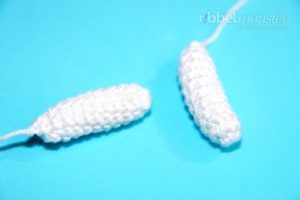 Next you crochet also two arms for your polar bear. Every arm is crocheted from bottom to top in spiral rounds. 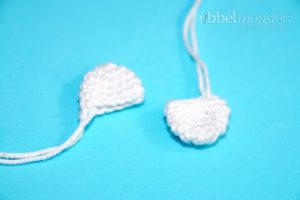 Next the ears for your polar bear are missing. Each ear we crochet from top to bottom in spiral rounds with single crochet stitches. The ears wont be filled, just fold them flat. 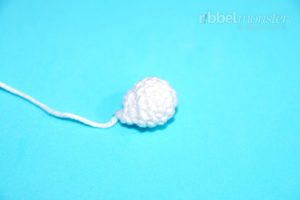 Now we also like to crochet a polar bear tail. There for we start a the tip of the tail and crochet against with single crochet stitches in spiral rounds. 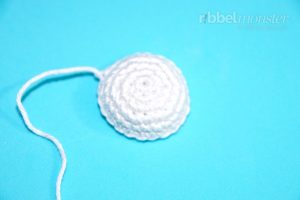 At last we crochet also a nice snout for the polar bear. We start at the centre and crochet to the outside in spiral rounds with single crochet stitches. 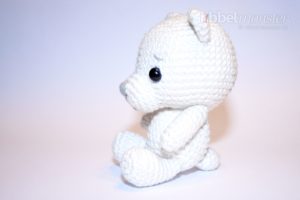 Now all that’s left is sewing all pieces together. In order to better see the right positions for all pieces it´s really useful to put everything together with needles.

First you look for the middle between the eyes and embroider the nose. For this you can use black or brown Darning Yarn. 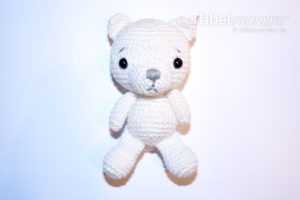 Start with horizontal stitches around two stitches until the nose has the desired volume. Then you stitch on a vertical stitch and two stitches at the sides. The last three stitches should look like an inverted Y. 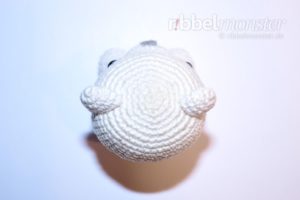 Next thing is sewing on the ears. Fold them flat and sew them on with the straight side to the head. The ears should have a slight curve to the back and make a pretty straight line in the middle of the head. 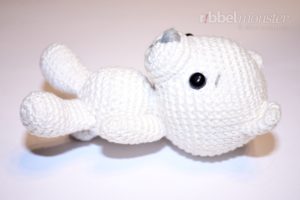 Now you can sew on the arms. They are at the side of the body right underneath the head. You can use the method for thread joints to get movable arms. Just take a look at the tutorial, because it´s really simple. 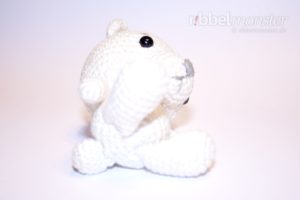 In the end the legs are folded and sewn on the body. Attend that the feet need to look slightly outside, so the polar bear gets no X legs. Also the gap between both legs should be right under the nose. 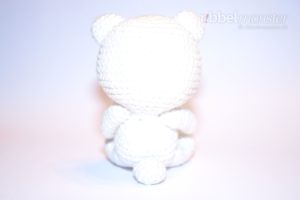 At last you sew on the tail to the back. The tail will be folded flat and sewn horizontal. Attend the correct position, cause the tail is the counterweight to let the polar bear sit.

I congratulate you to own a personal polar bear. By the way he likes to eat fish at most. See you! 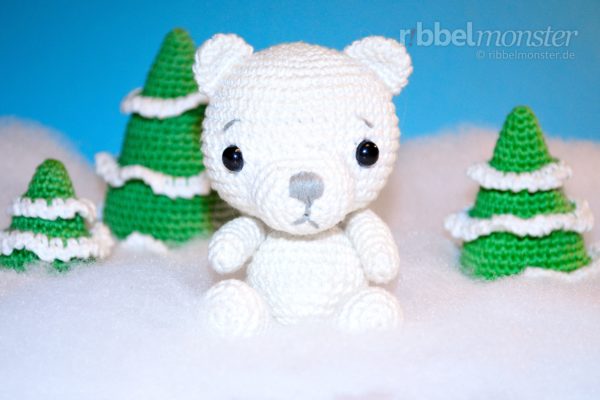 The Pattern for the pinetree Seiba in the background you´ll find also on this blog.